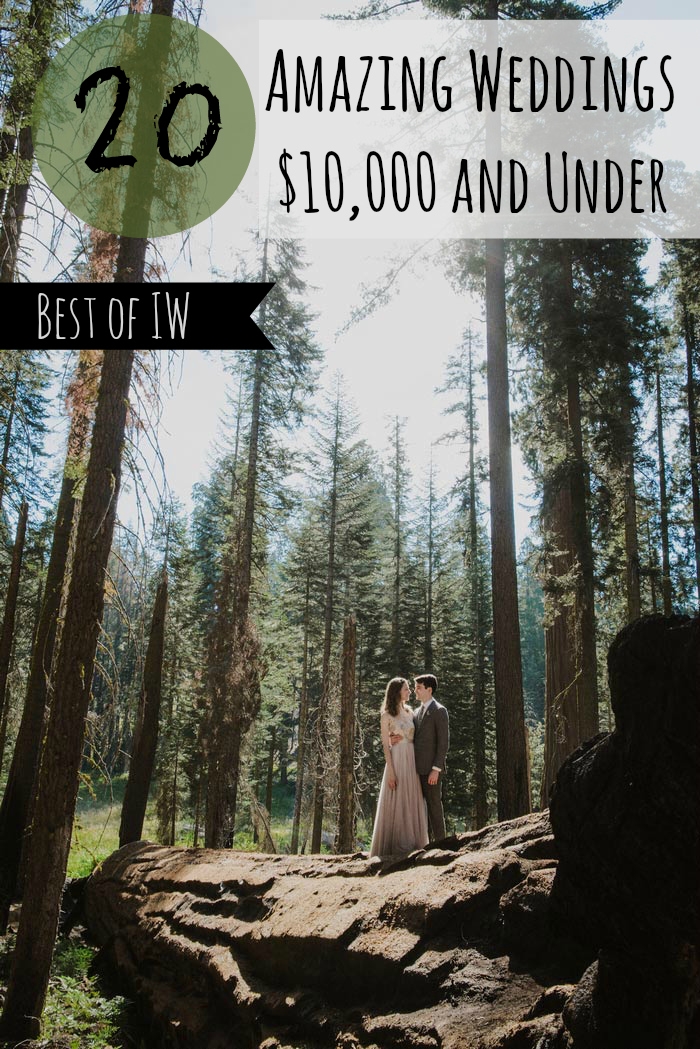 This year has been a beautiful year for small weddings! We couldn’t think of a better way to finish off the year than to create a round-up of some of our favorite weddings from 2016, starting with weddings under $10,000. Click on the photos below to view the full weddings.

When it came to planning their wedding day, both Brittany and Cameron agreed that they wanted to keep things simple. While Brittany wanted to elope on the beach,  Cameron wasn’t quite on board with the idea. The couple compromised and opted instead for a small wedding at one of their favourite spots – Yahoo Falls – with just their closest family and friends by their sides. (Photographed by Brandi Potter.) 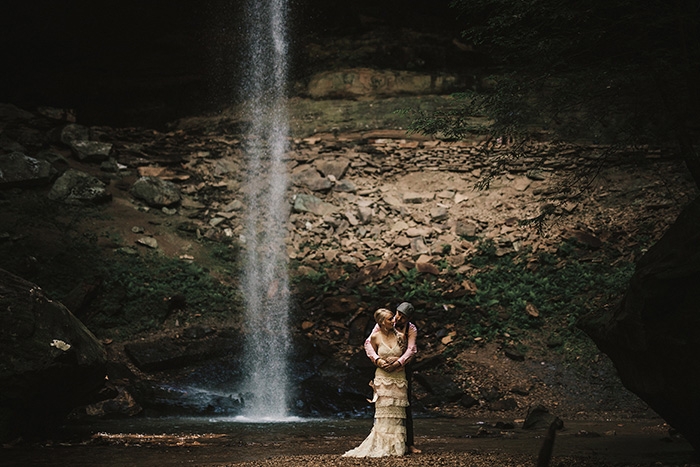 For Ashley and Kyle, having an intimate wedding meant not having to sweat the small stuff. Because there wasn’t a large guest list to impress – just their immediate family and few close friends with whom they could laugh off any mishaps – the couple didn’t let the threat of impending rain or a reception venue change rattle them; they simply focused on the most important task at hand; getting married! (Photographed byRed Boat Photography.) 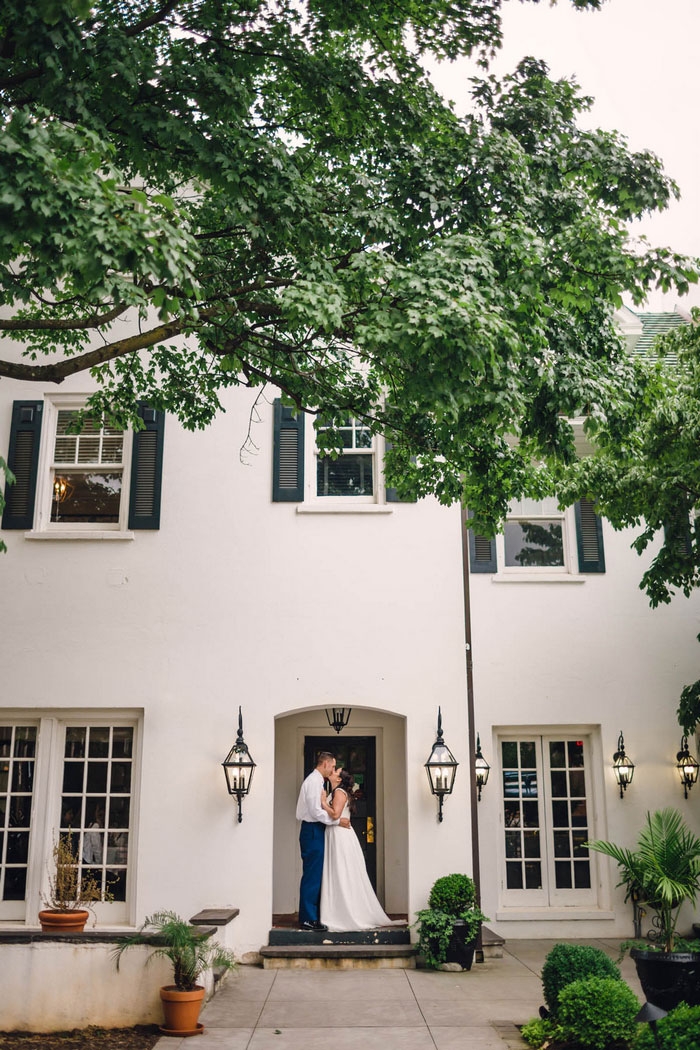 With a breathtaking venue, adorable flower girls, and a red velvet cake to die for, Jacqueline and Andrew’s rustic Pointhouse wedding was a dream come true. Best of all, was the fact that the couple pulled it off (with the help of their wedding planner) without breaking the bank. (Photographed by Coco Photography.) 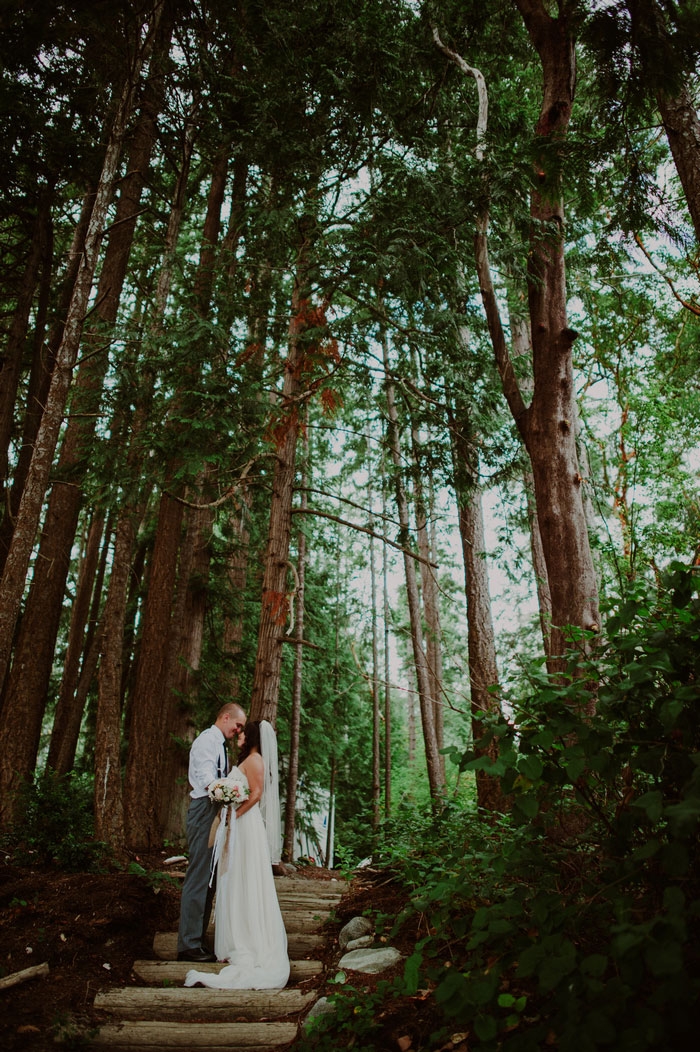 Caitlin and Shawn originally set out to have a big traditional wedding, but as their anxiety over the idea of a large guest list grew, they opted for an elopement instead. For the bride, however, the thought of not having her father walk her down the aisle was too heartbreaking a notion to even consider. So, in lieu of a traditional elopement without any guests, the couple chose to invite their immediate family to join them in Kauai, Hawaii at the Na Aina Kai Botanical Gardens. (Photographed by Sealight Studios.) 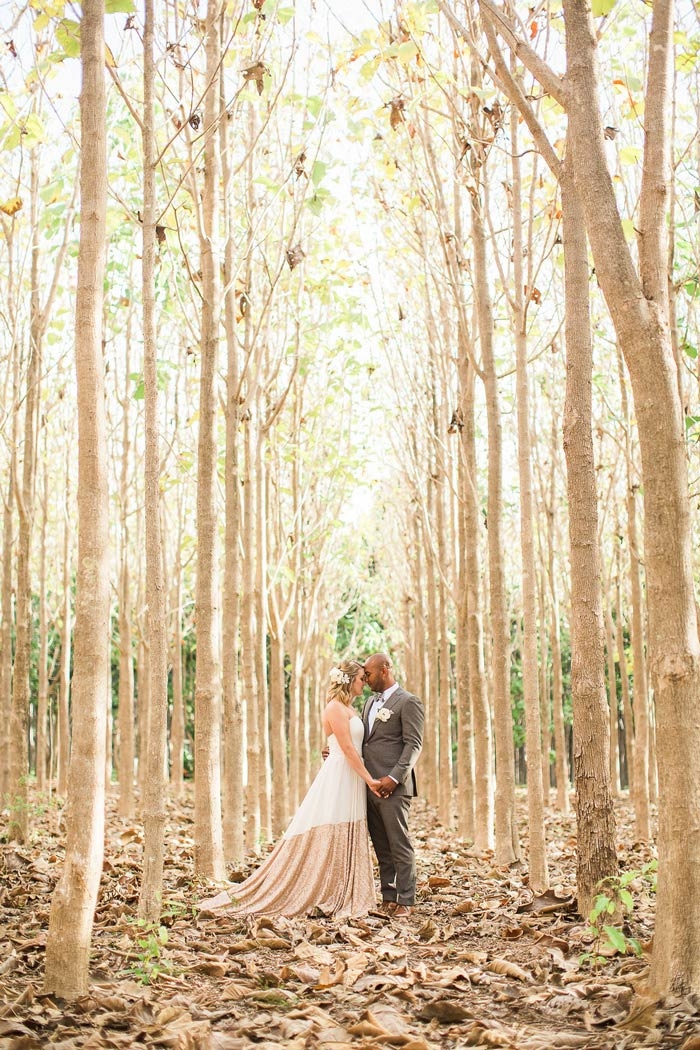 Like many couples who choose to have an intimate wedding, Chelsea and Jared simply wanted to share their  special day with those closest to them – their family and a few friends – while keeping the focus of their nuptials on each other and their loved ones. (Photographed by Micahla Wilson.) 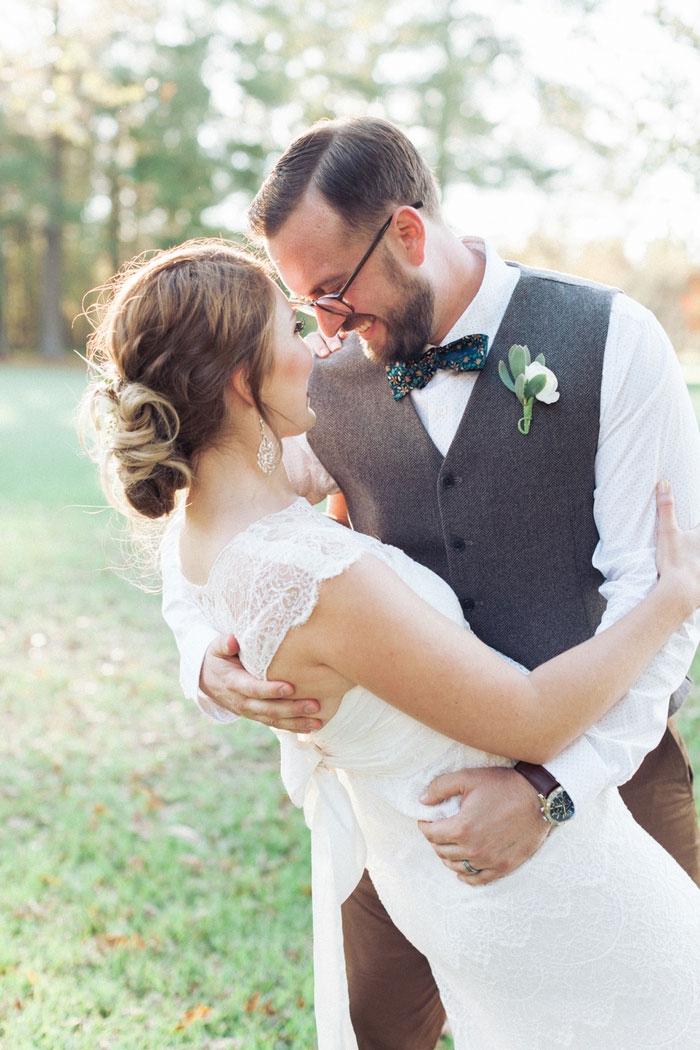 Sarah and Reese didn’t even bother to make a guest list when it came to their wedding day. From the beginning, the couple knew that they only wanted to celebrate with their immediate family – the same people that would still be by their sides in 30 years. (Photographed by Wesley and Emma.) 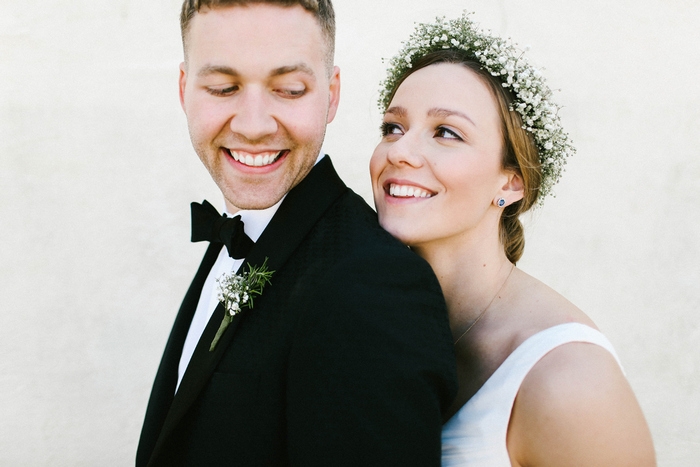 Not wanting to share their wedding day with 200 guests – and knowing they couldn’t invite one cousin without inviting all of them – Ashely and Nick quickly decided that their’s would be an immediate family only affair. With only 30 guests  – including a handful of their closest friends – the bride and groom were able to have the kind of stress-free and budget-friendly wedding they were after with a quick, casual ceremony at the Palace of Fine Arts and a fun relaxed reception catered by Tacolicious at the bride’s best friend’s apartment. (Photographed by Milou and Olin Photography .) 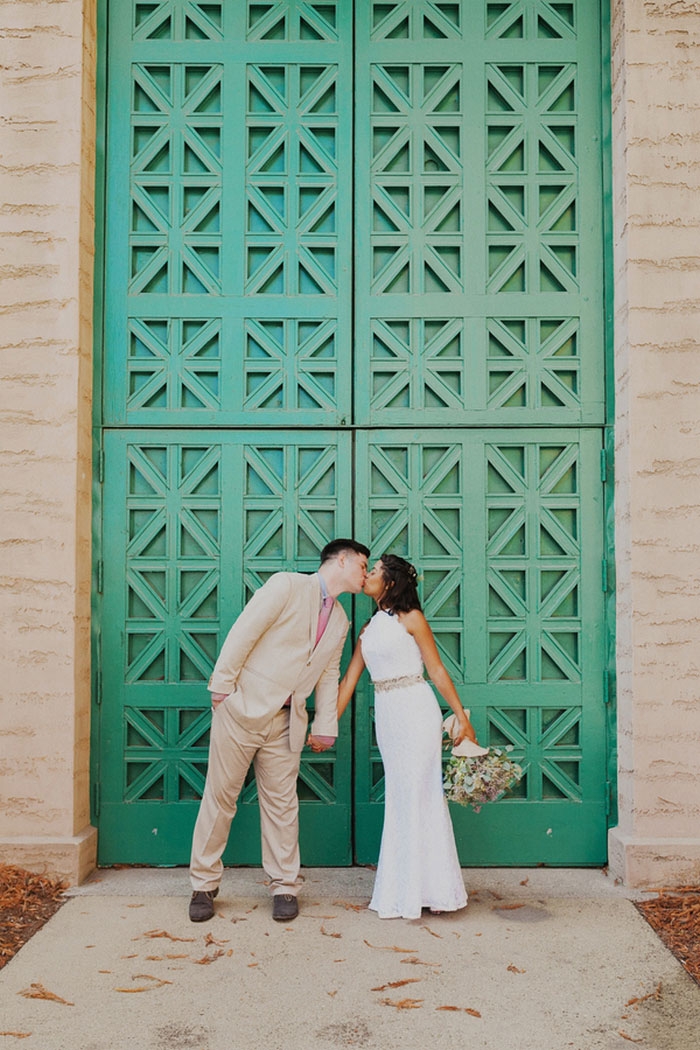 A wedding cake lost in the mail, a couple of uninvited ceremony guests in the form of a bear cub and its mama bear, and one spontaneously chosen, not to mention stunning, ceremony site are just a few of the wild highlights from Julia and Jeff’s wedding in Sequoia National Park. The most meaningful highlights, however, came in the form of the memories they were able to create and share with their 19 guests, each of whom had a part in leading a portion of the wedding ceremony. (Photographed by Helena and Laurent Photography.) 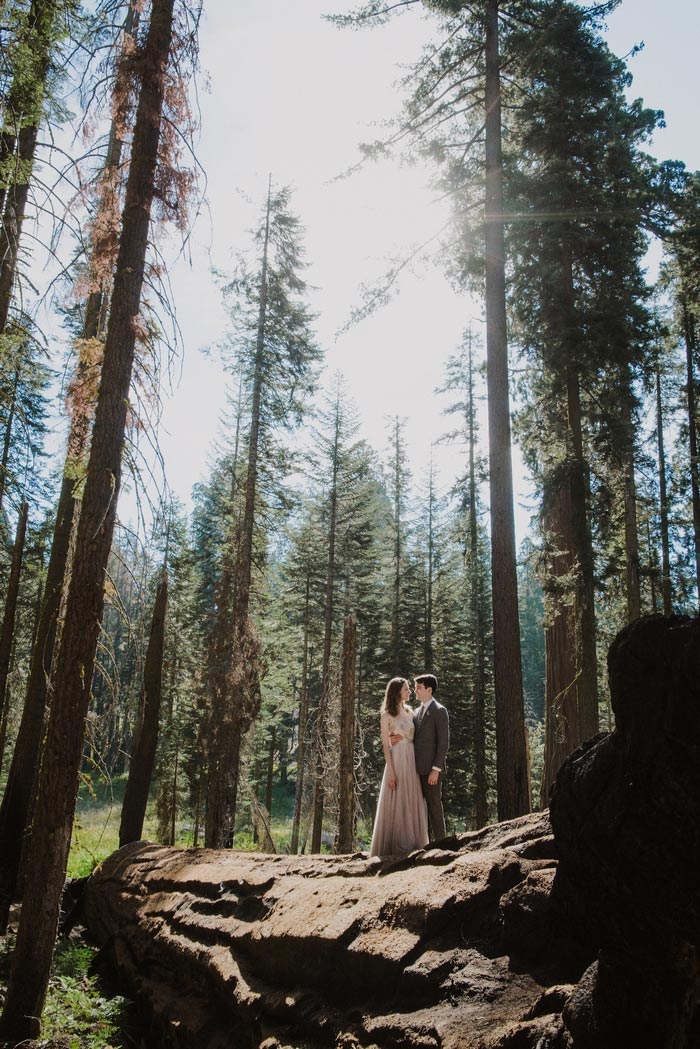 For Olenka and Mykola, having an intimate wedding didn’t just mean having a small guest list, it meant organizing a private family-oriented affair that included their guests in every aspect of their special day – from planning and decorating the venue, to celebrating together. (Photographed by Nickolay Debelinsky.) 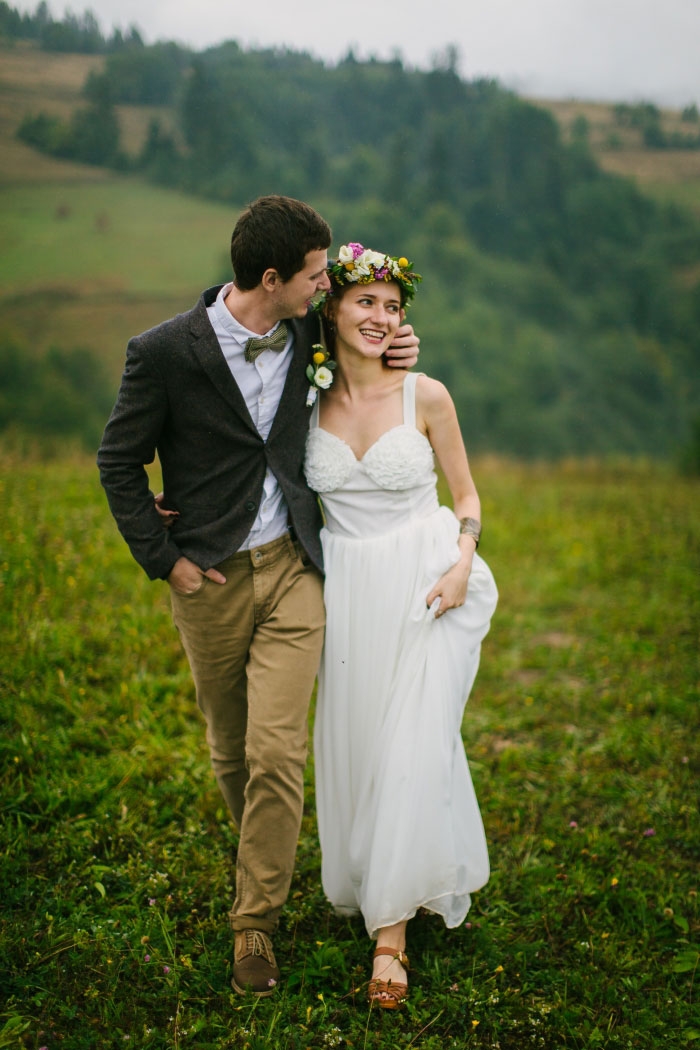 When it came to their wedding day, Madelene and Peter knew exactly what they didn’t want – a stiff, traditional church wedding. Instead, the couple gathered up their friends and family, hired an officiant (complete with traditional Swedish garb), put a bow tie on their adorable pup, and got married on the beach in the rain. (Photographed by Photo by Betsy.) 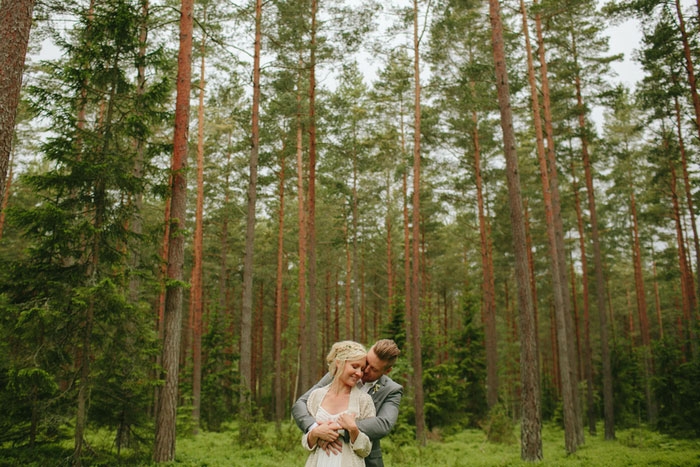 Securing a rambling Victorian home for four days, Iain and Althea designed a mini-holiday that teased conversations and intimate moments beyond the constraints of a reception. From their entrance announced by bagpiper, to a beer and rib reception, they remained authentic to the rhythm of the life they’ve created together, and their weekend with a wedding in the middle. (Photographed by This Rad Love.)

Surrounded by the breathtaking views of the Big Sur Coast and beauty of its redwood forest, Kaitlyn and Matt chose Limekiln State Park in California to begin the next chapter of their lives together. (Photographed by Paige Nelson Photography.) 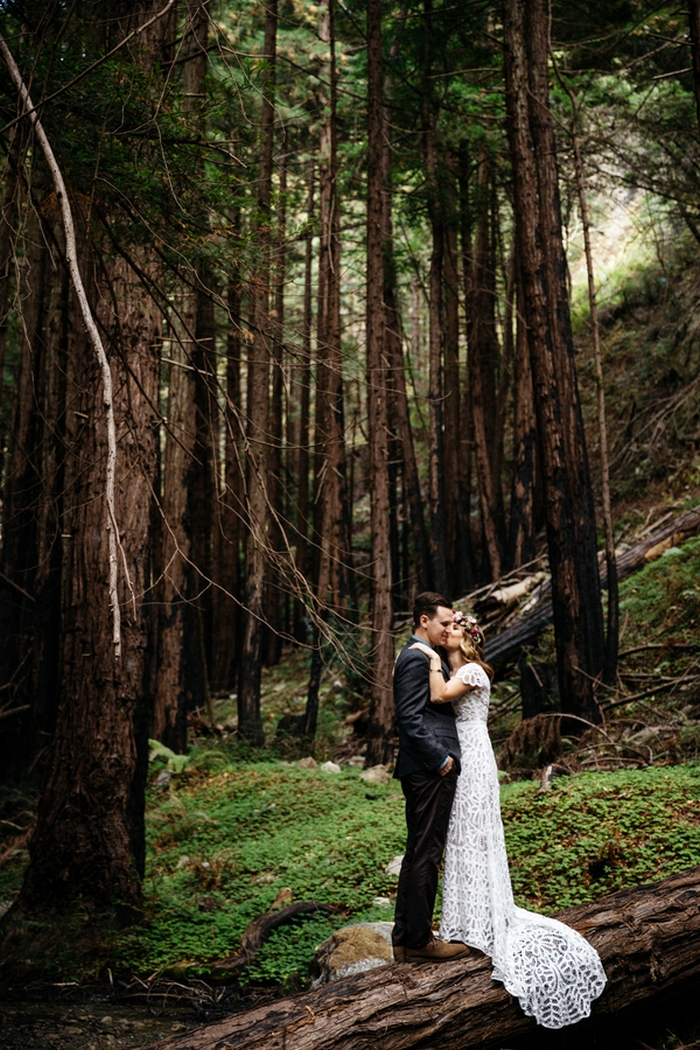 With its unspoiled natural beauty, Michigan’s Drummond Island was the perfect backdrop for a late afternoon sparkling Prosecco toast to Celina and John’s union. Drummond Island & Conference Center, which is a remote retreat tucked offshore at the top of the state, was the ideal location for the couple’s casually elegant wedding on the island. (Photographed by Bryana Riutta of Riutta Images.) 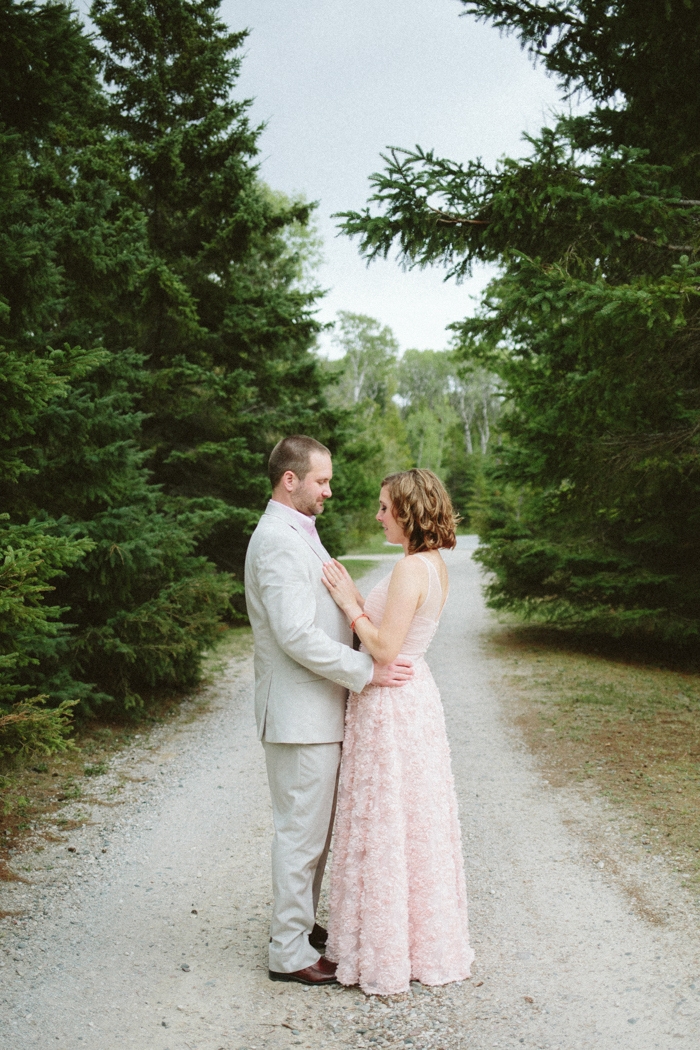 Anna and Awad wanted to keep their wedding as low-key as possible. While they weren’t interested in drawing lots of attention to themselves with a large wedding, they still wanted to celebrate with those nearest and dearest to them. An intimate ceremony and small reception was the perfect fit! (Photographed by Callie Manion.) 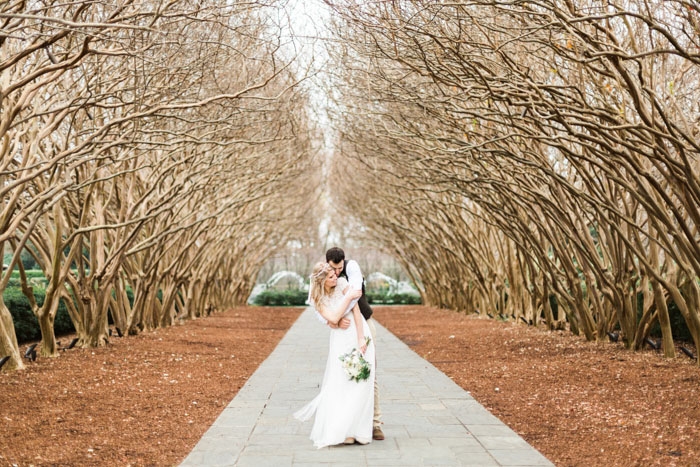 Harley and Joseph were anxiously awaiting the arrival of their first born son when they decided to ‘officially’ become a family in front of their nearest and dearest in Sedona, Arizona. (Photographed by Dan & Erin PhotoCinema .) 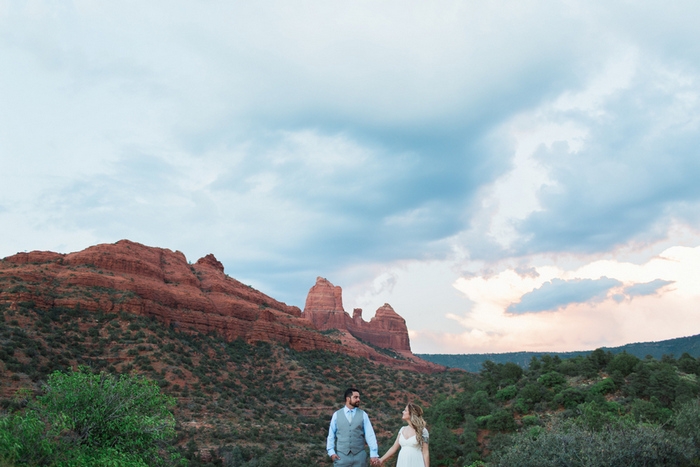 Lauren and John were almost convinced that eloping would be the only way they’d be able to have the intimate wedding they so badly wanted. Their beloved friends and family were very opinionated about the guest list, and no matter how they swung it, they knew they wouldn’t be able to please everybody. So they forged ahead with the wedding THEY wanted, knowing that ultimately their wedding day was about the two of them making a lifelong commitment to one another. (Photographed by Laura K. Moore Photography.) 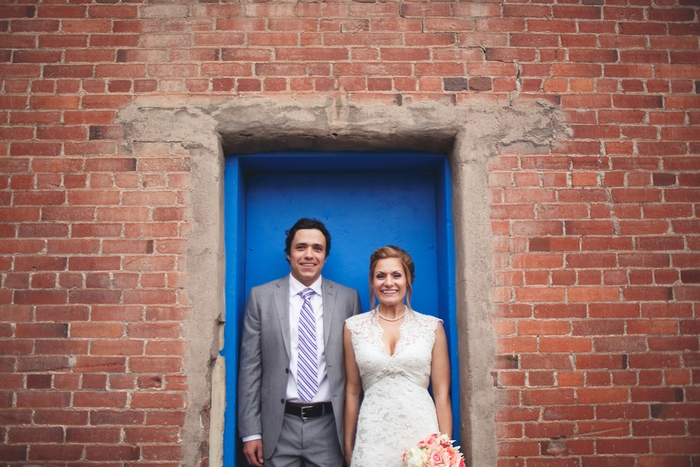 With the groom’s family residing in Scotland, and the bride’s family in America, Marlo and Allan knew immediately after they were engaged that an intimate wedding suited them.  (Photographed by Lola Grace Photography.) 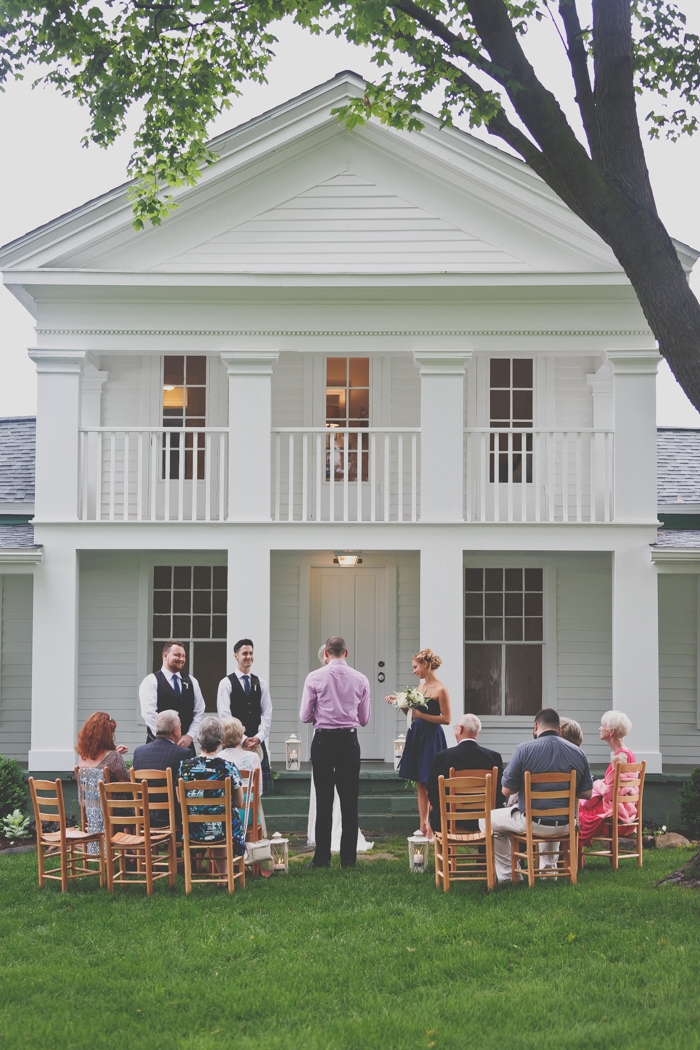 Emily and William wanted to be immersed in nature and surrounded by their closest family and friends on their wedding day. They also didn’t want to have to sacrifice wedding decor or location because of a tight budget. Their solution? An intimate wedding in their own backyard! (Photographed by LIONLADY Photography.) 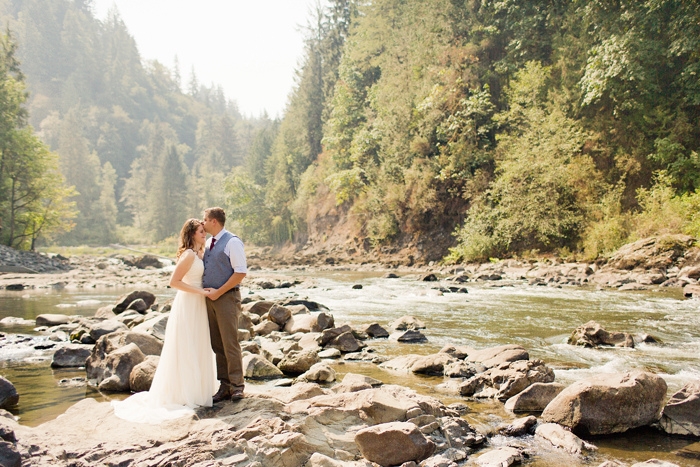 Using the help and many talents of their family and friends, Anneke and Cameron’s destination wedding in Nova Scotia was a truly collaborative affair. Travelling from all across the country, their guests helped transform the Second Paradise Retreat into the wedding venue of the couple’s dreams, and celebrated the couple as they exchanged their vows by the bay. (Photographed by Nicole Payzant .) 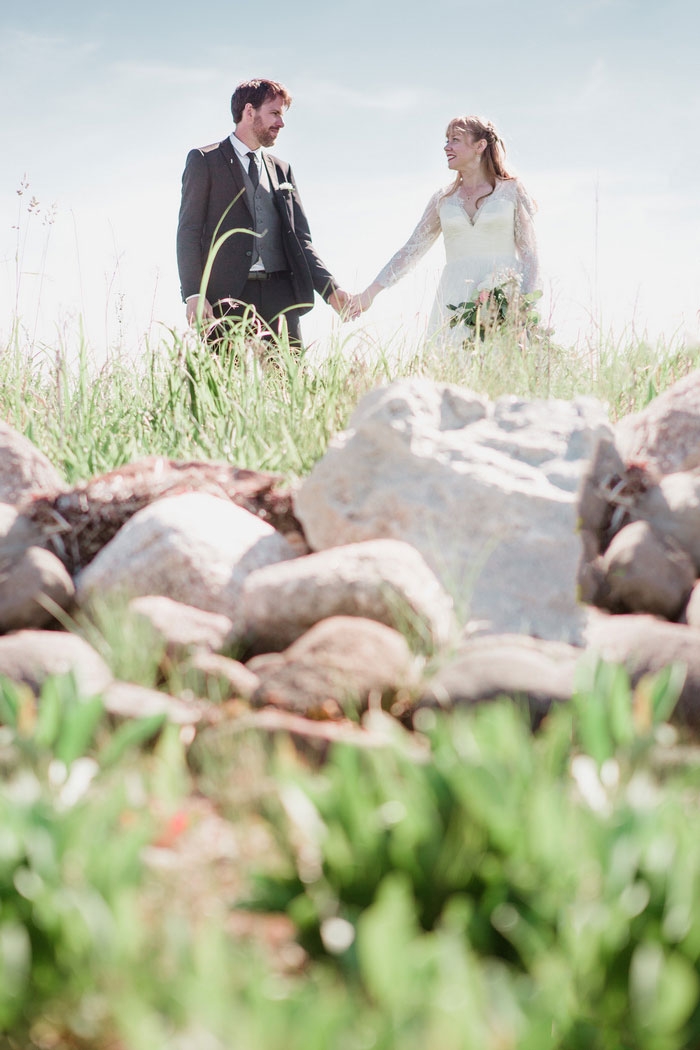 Kansas couple, Mariella and Kyle, had an intimate destination wedding in the Olympic Mountains of Port Angeles, Washington. Although they had to give up some traditional wedding day elements because of their decision to have an intimate wedding, the couple was rewarded with a slower paced wedding that allowed them to savour each and every minute of their celebration with those they love the most. (Photographed by Adrien Craven.)